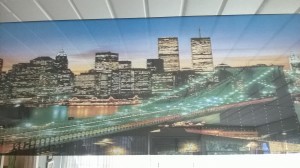 I met my father-in-law, Tony, a few short months before his death in 2010. The first time I accompanied Mark to visit his parents at their home, Tony was too weak to get out of his reclining chair, but his warm demeanor immediately put me at ease. We chatted about my family and his, and spent much of the evening laughing.

He had a great sense of humor, and the playful bantering between Tony and his wife Mary could have been pulled directly from the sitcom “Everybody Loves Raymond.” Tony was more of the straight man with a dry humor that complemented Mary’s proclivity for dramatics. Sixty-five years of marriage produced an ambience of absolute devotion that permeated their home.

As we left that evening, Mark showed me his father’s garden. Filled with the remnants of plants a little beyond the growing season, the devotion Tony had for it was still apparent. Tomato plants arranged in neat rows covered an enormous part of the community plot. It was his custom to share his garden with the other residents of the senior housing complex. Mark laughed as he told stories of his dad tearing through the vast parking lot in his scooter, much to the chagrin of Mary, with fresh vegetables in the basket.

Over the next weeks, our visits with Tony moved from his home to a nursing home, and later, to the hospital. During one visit, he was well enough to sit outside and invited us to join him at a table in the shade. He was trying to tell a story, and became frustrated as Mark and Mary joked around. He had something important to share and wanted our undivided attention. They settled down and Tony told us stories from his childhood and spoke of his twin brother. He wanted to tell me about his family.

During a visit with Tony while he was in the hospital, he told us he wanted Mark and I to get married. We laughed because we had been dating just a few months. He told us we belonged together and this was something he just knew. We smiled, thinking we were making an old man happy. Not long after, Tony returned home to receive hospice care. He passed away on September 9, 2010. Mark and I were married nine months later.

When Mark moved into my home, he brought a large mirrored picture of the New York City skyline. I looked at him, a little puzzled. He never mentioned any particular affinity for NYC. He explained it belonged to his father. Tony loved this mirror. He especially enjoyed how it lit up, bringing the skyline to life. We agreed we had to hang it on the wall, just to have a little piece of his dad with us. We have moved a few times since then, and we always find a place for Tony’s mirror somewhere in the house. Although I did not know him for long, I am grateful to have met such a dignified and true gentleman. We display the mirror to honor Tony.

Clothes and toys, recipes and jokes, advice and prejudice: we all have to handle all sorts of hand-me-downs every day. Tell us about some of the meaningful hand-me-downs in your life.