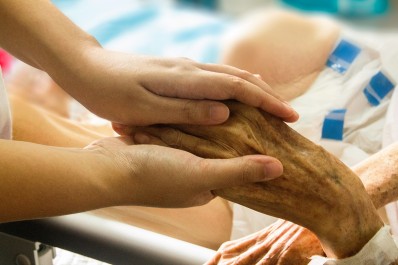 In the end, hands told the story

a common denominator among the dying

Some clenched in anger or pain or both

Some folded to accompany fervent prayers

offered by a minister speaking in thunderclaps and cloudbursts

as the faithful gathered with perfect posture to welcome the hereafter

a child, ignored, sleeps in a corner

Some reached out as if to delay the inevitable

begging for reprieve, an end to this suffering

immured in a place that reeked of antiseptic and rot

Some were limp as if in acquiescence

relaxed as stories of days gone by were shared without regret

a last celebration of sorts, glasses of wine filled and refilled

Some were given to shake and tremble

his slovenly dressed son rubs his scraggly beard and weeps

And she, as witness to final moments, embraced each one,

providing comfort and compassion and a hand to hold