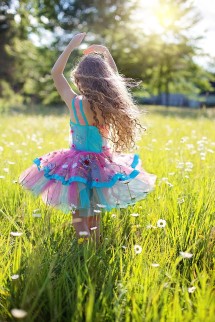 Imagination stands in the road, conducting

She is a prima ballerina dancing in the clouds

Rain, no match as she clutches her skirt in her hands

Her steps measured, softened by the mist

Her arms hold a dozen invisible roses as she moves… chassé, chassé

Skies simmer as she raises her sapling arms, conducting

branches swaying in a fierce wind shrouded in mist

She dawdles and reverses her step, lost in dreams

Joy revealed when innocence is held in her hands

An angel’s loop splays across the clouds

She embraces the fog, these low-slung clouds

as she traces a granny knot in the dirt, chassé, chassé

She follows their flight, beauty conducting

Anything is possible as she dreams

there alone in the mist

She imagines magic breathes in that mist

bringing to life her performance in the clouds

She knows the power of dreams

She hears the orchestra and the maestro conducting

as she mimics his movements with her hands

As delicate as snowflakes in her hands

she is one with the mist

this ballet in the clouds

She dreams, she dreams

She believes in the magic of dreams,

this world she holds in her hands

bathed in a cool night’s mist

beneath a sky of clouds

Imagination stands in the road, conducting

Captured in moments draped in mist

and protected by angels in the clouds

anything is possible when imagination is conducting

Follow Writing and Reflections on WordPress.com
Join 3,907 other subscribers