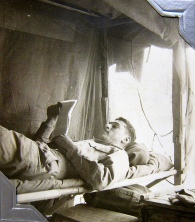 As young boys, they left home
bound for adventure, bound for war
Courage still an illusion unknown
Death, a distant enemy
even as mothers dried tears and prayed
that freedom was worth the cost

Striving to be the best no matter the cost
each would combat loneliness with letters from home
Some read again and again while they prayed
Restless as the rain, they fought this war
and celebrated each victory of light, each defeated enemy
Bravery, a word no longer unknown

What was so simple slipped into the complicated unknown
as these boys became men who counted the cost
Side by side they fought the enemy
knowing some would never again see home
Accepting this was war,
they bowed their heads and prayed

And in times of war, how they prayed
to escape the enemy, to escape the unknown
No matter the cost, please let them come home